The catalyst fertilizers market is estimated to account for USD 2.3 billion in 2018 and is projected to reach USD 2.5 billion by 2023, at a CAGR of 2.36% during the forecast period. The market is primarily driven by growth in the production of fertilizers and expansion of production facilities in Asia. Also, with the increase in greenhouse gas emissions from ammonia plants, innovations in the catalyst industry to control emissions through selective catalytic reduction technology are projected to drive the growth of the market over the next five years. 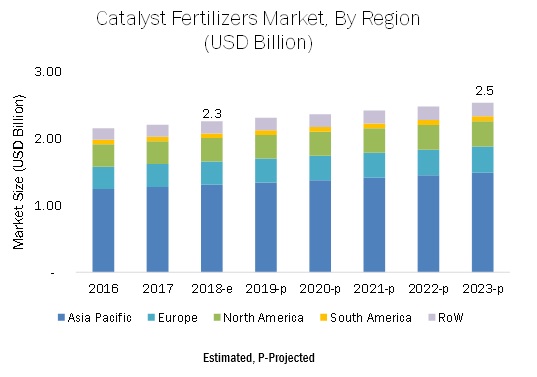 The use of base metals for fertilizer production is projected to witness high growth during the forecast period.

Iron, copper, and nickel are the major base metals that exhibit efficient catalytic activity and are the majorly consumed catalysts across all industries. These metals are abundantly available in the market and are easily extracted by a majority of companies. These are less expensive as compared to precious metals, and the number of players offering these metals for catalytic action is also very high. Thus, it is projected to grow at the highest CAGR from 2018 to 2023.

Haber-Bosch process is estimated to dominate the catalyst fertilizers market in 2018.

Nitrogenous fertilizers are one of the highly consumed nutrients across the globe while ammonia is the most common nitrogen product used as a fertilizer. With the emergence of the Haber-Bosch process, ammonia synthesis has increased by a manifold with the help of catalysts. Since ammonia is the most produced fertilizer, which is further converted to urea and ammonium phosphates, Haber-Bosch is the dominant process for ammonia fertilizer production where catalysts are an important part of the plant process design.

Asia Pacific is estimated to dominate the market in 2018 and is projected to be the fastest-growing in the market through 2023.

Our 850 fulltime analyst and SMEs at MarketsandMarkets™ are tracking global high growth markets following the "Growth Engagement Model – GEM". The GEM aims at proactive collaboration with the clients to identify new opportunities, identify most important customers, write "Attack, avoid and defend" strategies, identify sources of incremental revenues for both the company and its competitors. MarketsandMarkets™ now coming up with 1,500 MicroQuadrants (Positioning top players across leaders, emerging companies, innovators, strategic players) annually in high growth emerging segments. MarketsandMarkets™ is determined to benefit more than 10,000 companies this year for their revenue planning and help them take their innovations/disruptions early to the market by providing them research ahead of the curve.